Nate Reuss live in Manila at the Kia Theater

Concert goers and music lovers mark your calendars, as Fun’s singer and songwriter will perform at the newest concert venue in Cubao, The Kia Theater, in a show dubbed as Nate Reuss live in Manila happening on January 19, 2016. 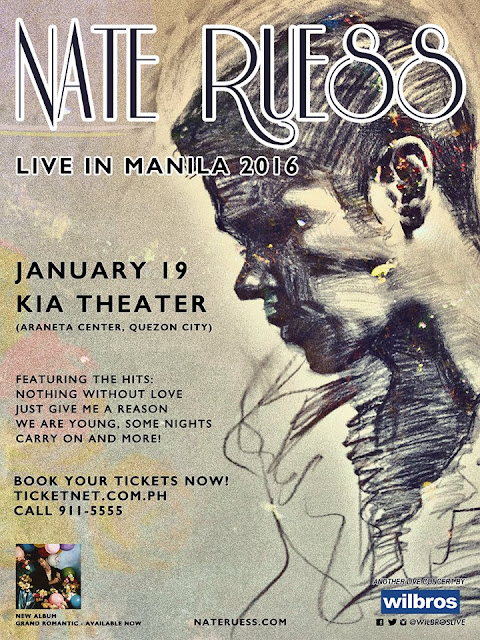 Nate Reuss is a Grammy Awards winner and popularly known as the singer/ songwriter of the pop indie group called FUN. Popular songs from Fun are “We Are Young”, “Some Nights” and “Carry On” which are all big hits.

Now going solo, Nate Reuss has his own album called “Grand Romantic” that features hit songs such as “Nothing Without Love” and other fantastic feel-good songs. It was just last summer that Nate started writing the tracks for his solo album and he successfully injected his hopelessly romantic side on each song that he created.

During the time he is in the process of making his solo album, Nate Reuss is just beginning a new romantic relationship which has been the inspiration for writing this new album filled with love-struck anxiety and at the same time excitement.


Catch the man behind the popular songs of the band FUN, as he sings huge hits from the group and songs from his new album. Nate Reuss live in Manila is on January 19, 2016 at the Kia Theater Cubao.

This concert is presented by Wilbros Live. For ticket inquiry you may visit ticketnet.com.ph or call them at 911-5555.
Posted by Congeniality Tess at 9.12.15