“CIRCA” GIVES TRIBUTE TO PHILIPPINE CINEMA

New poster of CIRCA revealed! A fitting tribute to Filipino cinema as it celebrates its centennial this year, CIRCA relives the glory days of cinema through its characters – with the great Anita Linda (who at 94 is the oldest working actor in the industry) headlining the film about Doña Atang, a once celebrated film producer in the early days of cinema who wants to be reconnected with her peers as she celebrates her 100th birthday. Her wish opens up a Pandora’s box as her filmmaker/grandson searches for them - we remember the glorious years of cinema from of its workers- a nostalgia piece filled with memories of what the good old days of Filipino cinema is like. 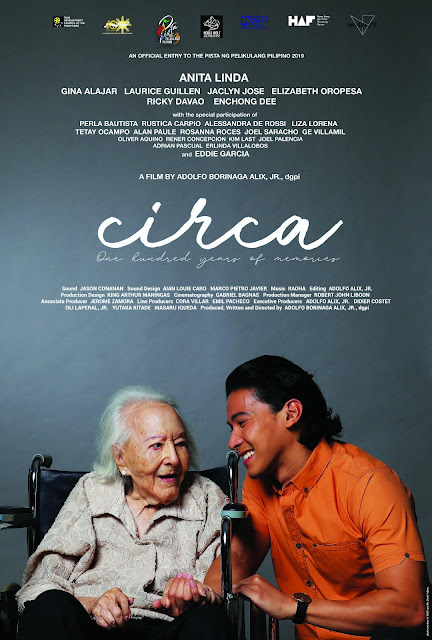 CIRCA not only touches on the issues of nostalgia but it also is a drama about a family that wrestles between the past and the future as Doña Atang’s siblings are beset with the conflicts of what to do with their family’s legacy.

Written and directed by Adolfo Borinaga Alix, Jr., CIRCA opens this September 13-19 in select cinemas nationwide as an official entry in the 2019 Pista ng Pelikulang Pilipino’s Sandaan Showcase.  The film is produced by Noble Wolf ABAJ Film Productions and RSVP with the support from the Hong Kong-Asia Film Financing Forum (HAF) and distributed by Solar Pictures.

Synopsis:
Doña Atang, a once celebrated film producer from the earlier years of Filipino cinema, celebrates her one hundredth birthday. For her wish, she wants a reunion with all the actors and staff that she has worked with in the past. She is also looking for an unfinished film from one of her directors. Her grandson, a budding filmmaker, Michael decides to take the task of finding them. As he does, we remember the glorious years of cinema from of its workers-fragments of a colorful past filled with faded memories.  Will it remain as part of the past?

This year is the centennial of Philippine cinema. From the first light coming the projector of the first film
about the life of our national hero Dr. Rizal, cinema has evolved into a lot of shapes.

Circa is a film in which I want to confront the demons surrounding the old and the new form of cinema. Of what is pure and classic, of what is new and stylistic. I am interested to know the ghosts of the past and how a simple wish of a dying woman can open up a Pandora’s box full of memories, emotions, pains and unresolved issues about what we love and hate about cinema. The past always remains to be a thing to be looked upon,but I think it is important as a filmmaker to be able to understand the currents of what used to be to be able to meet with the waves of the present. The interplay of actors and various characters during the reunion will create a microcosm of what use to matter about the craft of filmmaking. Their voices will speak against the walls of death echoed in the old structure of the mansion which used to be the hub of the old producer’s studio system. Michael represents the new filmmaker. He may look at old films as references for what he wants to do but it is important to live and breathe cinema more than evoke a past.

In the end, Doña Atang maybe cinema personified- her dying wish maybe what films are all about.